All Collections
Battery and Hardware
Power and battery troubleshooting

Written by Carol
Updated over a week ago

If you're setting up Arsenal for the first time, the best place to start is the Setup article for your camera & phone brand in the Quick Start Guide.

My Arsenal device won't turn on

Check to see if the green power light is on. 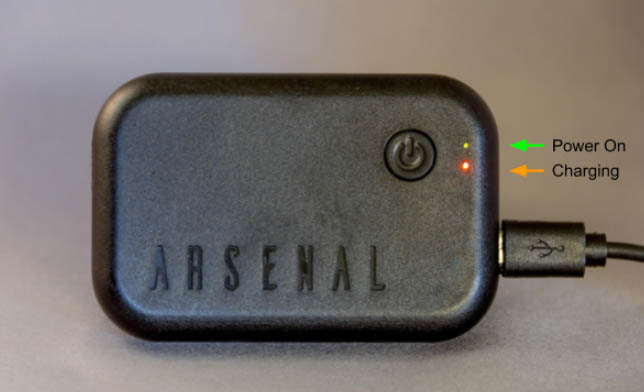 If you can see the green light, Arsenal is powered on. Read about app and phone troubleshooting for other solutions.

Make sure that your Arsenal battery is charged.

If you press Arsenal’s power button and you do not see the blue LED bar light up briefly, your Arsenal isn’t charged. Arsenal is charging when an orange light is visible on the top of the device. Only the port on Arsenal's right side (next to the power button) can charge Arsenal. If you plug the charging cable into the wrong port, the battery can't charge. You will know Arsenal is fully charged when the orange light goes out.

If you're still having trouble, contact Arsenal's support team at help@witharsenal.com. We'll be happy to help!

Make sure you connected the charger to the charger port. Only the port on Arsenal's right side (next to the power button) can charge Arsenal. If you plug the charging cable into the wrong port, the battery can't charge.

Make sure your charger is fully connected to the power source.

Press the charger all the way into the power source. You can plug the USB charging cable into any USB-supported power supply (such as a USB wall outlet, laptop, external battery pack, or other device).

Do not attempt to charge Arsenal in extreme temperature conditions. Charging Arsenal when it is very cold or very hot is detrimental to the battery.

My Arsenal is turned on, but it doesn't work

Make sure the green power light is illuminated. If it's not, review the steps above.

Make sure your phone is connected to Arsenal's wifi network. See App and phone troubleshooting for details.

Make sure Arsenal is connected to your camera. See Camera cable troubleshooting for details.

My Arsenal won't turn off

To turn Arsenal off, briefly press the power button.

You should see the green power light turn off. Arsenal will also automatically turn off when not in use to preserve battery life.

Fully charge your battery before using Arsenal. When Arsenal's battery is fully charged, the orange charging light will turn off.

Keep Arsenal warm. Like most electronic devices, Arsenal's battery gets used faster in the cold. Keeping it in your pocket or another warm place before and after shooting may extend battery life in cold conditions.

Adjust your photo stacking settings. Certain functions like photo stacking use additional battery life. You can extend Arsenal's runtime by turning off exposure and focus stacking in the settings menu.