Arsenal 2 Getting Started with Handheld Mode

How to use Arsenal 2 for handheld shooting without a tripod

Written by Arsenal
Updated over a week ago

Arsenal 2's Handheld Mode enables you to capture great images without a tripod.

Get ready to shoot with Arsenal 2

Before shooting in Handheld Mode, always make sure that:

Make sure your Arsenal 2 is secured tightly in the hotshoe/coldshoe of your camera.

Unlike Arsenal 2’s other shooting modes, you don’t need to use your phone.

If your device isn't already powered on, briefly press the power button to turn it on. Arsenal 2's blue LEDs will animate during startup. The back LED bar will go off while the power button LED will remain on, indicating Arsenal 2 is ready. Once your Arsenal 2 has booted, double tap Arsenal 2’s power button.

The LED bar will animate to show Handheld Mode is enabled. Note: Your phone is not needed for Handheld Mode, but If you open the app you will see a message that reads "Live View Paused In Handheld Mode" if you are using a DSLR camera. 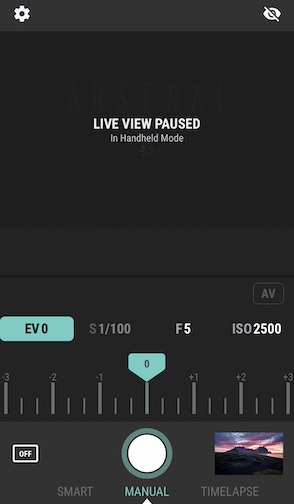 If you are using a mirrorless camera you will see a message that reads "Not available while in handheld mode." If you try to trigger a shot through the app. 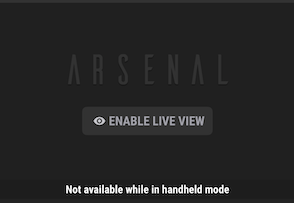 Note: If Arsenal 2 powers off instead, make sure your camera is turned on and connected with the camera cable. Then turn on Arsenal 2 and try again.

Once you’re in Handheld Mode, all you need to do is point and shoot. Arsenal 2’s AI will assess the current conditions and find optimal settings. Just as with other shooting modes, each photo is saved to your camera’s memory card as well as Arsenal 2’s internal Micro SD card.

The Arsenal 2 app is not required during Handheld Mode.

When using Handheld Mode with DSLR cameras, Arsenal 2 faces a challenge: it needs to leave the mirror down so you can use the camera’s viewfinder, and this prevents Arsenal 2 from “seeing” the scene. (This isn’t an issue on mirrorless cameras, since Arsenal 2 can continuously see the scene and update settings in real-time.)

To overcome this hurdle, Arsenal 2’s Handheld Mode updates certain calculations after each shot is taken with a DSLR. These are used to inform the subsequent shot. To improve Arsenal 2’s handheld accuracy with DSLRs, shoot a test photo when your subject or lighting conditions change. Arsenal 2 will then adjust the settings for the new conditions.

To review your photos in Handheld Mode, enable the Handheld Photo Review Gesture in your app Settings prior to moving into Handheld Mode.

To review the photos on your camera’s LCD simply tilt the camera 90 degrees down towards the ground and Arsenal 2 will pause updates to the camera's settings to allow photo review. Tip it back up to resume handheld shooting. We think this is a fairly natural gesture when reviewing photos. We've also added an LED indicator so you can check if you are in photo review mode (the regular “breathing” LED animation will change into two “breathing” LEDs at the left and right of the LED bar). For more modern Mirrorless cameras you will want to use your Image Review button as you normally would to go back through your photos.

Note: Handheld Mode is currently only available for Nikon, Canon, and Sony cameras.

Still have questions? Our friendly support team will be happy to help!